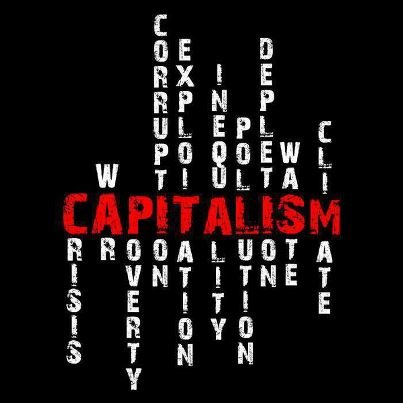 1. It does not provide meaningful freedom to capitalist societies

The above statement depends on how you define freedom. Merriam Webster defines freedom below as: 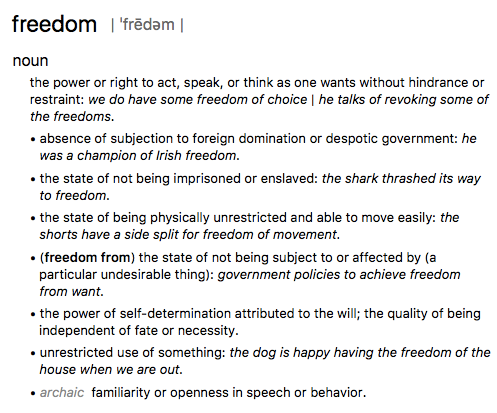 When Americans conceptualize freedom, they are usually concerned with negative freedoms: ‘freedom from.’ Freedom from state censure, bondage, tyranny, and enslavement. Now don’t get me wrong those freedoms are important but they don’t become truly meaningful in this society without the ability to be a free individual. How are these things different? We have to look at the definition of free. 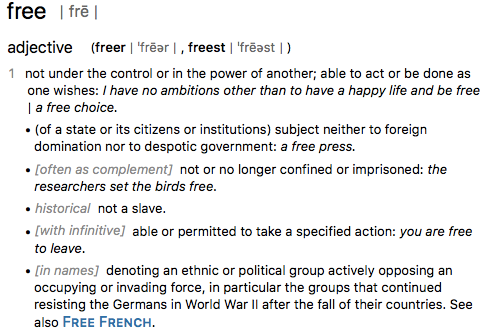 The definition of free gives both ‘freedom from’ and also a second part. The second part is critical: ability to act or do as one wishes. Freedom can be broken into two parts, an adjective and a suffix.

adjective: free – not under another’s control & the ability to do as one wishes

suffix: dom — a state of being

Americans need to understand that freedom is both freedom from control and the freedom to control one’s own life.

Now that we understand what I mean when I say freedom, we will move on to how capitalism does NOT provide freedom.

When industrialization first happened, people imagined a present-day where we would work three and four hours to sustain ourselves and then go off and do as we saw fit. Instead most of us are rats in a cage running as fast as we can to power the machine called capitalism. If we don’t run fast enough or smart enough, we will not get the rations doled out to us. Meanwhile there are a few fat cats that are living happy off the labor of the rat colony. (I think I took that analogy far enough)

Basically, we work longer in the day than 16thcentury peasants and take less vacation. According to Juliet B. Schor, author of The Overworked American: The Unexpected Decline of Leisure, the average annual hours worked by Americans in 2017 reached 1,780, whereas an adult male peasant in the United Kingdom worked an average of 1,620. Additionally, Schor states we don’t only work more hours than the peasant we have less vacation time than a 13th-century laborer who took up to 25 weeks off per year,while the average American worker has 16 days of vacation per year.

Maybe I got it wrong. Maybe this is true freedom and Americans wish to spend their finite time tolling away at a business for the profits of their boss. However, there are many data points that would say that Americans do not enjoy freedom as defined above. Consider these five points:

What can we conclude from those few numbers about the state of freedom for the American worker?

While a high number of workers want to leave their jobs only a small number do. Workers are dissatisfied with how they are expected to spend their workday, they are rightfully dissatisfied with their pay and that pay does not reflect the exponentially rising productivity of the American worker. I suspect that workers are underpaid, undervalued, and overworked for someone else’s profit. And workers know it.

Workers need more control over their pay, workload, and vacation time. If they got it, we would see the satisfaction with workload levels rise as well as their happiness indicators, and the number of workers who want to leave their jobs lower.

These would be signs of freedom. We would see more happiness, satisfaction with how the avg. person’s day is spent (workload), and a feeling of accomplishment that accompanies doing work that is valued and compensated well.

Not having the ability to control how you spend 213 8-hr work days out of 365 days a year does NOT equate to control over how one chooses to spend their time.

Let me say it again the true definition of free choice is the ability to control how one’s life is spent. For the average working American to be defined as a free individual they would need to be able to have multiple measures of control over their workplace, workload, and how much time they spent working (which they do not have).

2. The freedom ascertained by a select few are predicated on the unfreedom of many

We all know that some people have free choice as described above. I unfortunately am not one of them and should be grading right now as that is my job and I have surpassed my 3pm deadline set for me by my advisor. The individuals who are free and have power over how they spend their finite time depend on the people tolling away (like myself) to make them the capital that sustains their freedom. This is true locally, nationally, and globally. We can look again at wage growth to show how this is true. 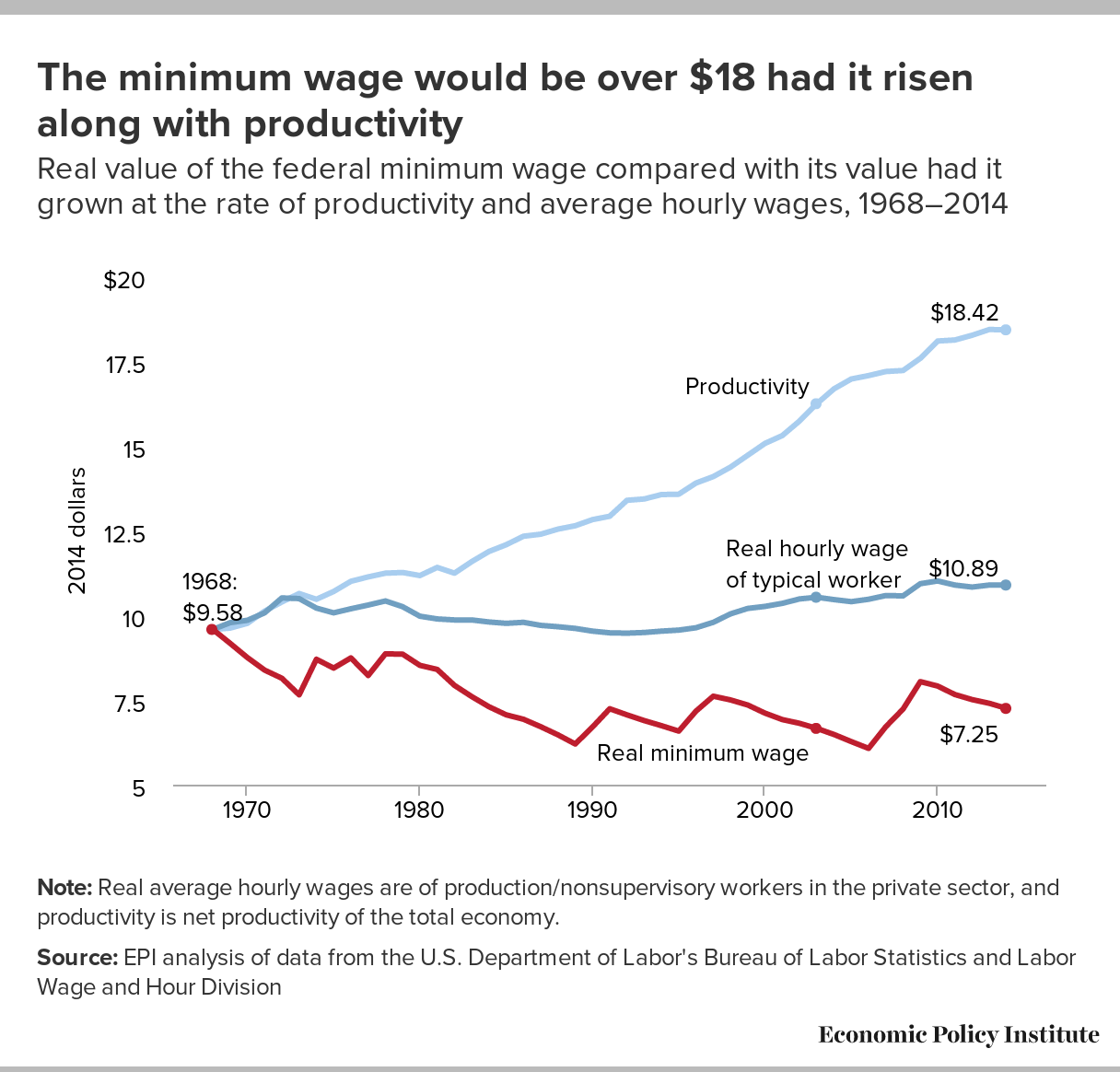 The chart shows that as productivity rises the real minimum wage falls and the typical wage of a worker stays flat. In other words, a class of people (the truly free) are profiting from the productivity of wage laborers who toil away at tasks assigned to them. This is true for all wage laborers not just the middle class and below.

Many would argue the more money you have the more control you have over how you spend your time. Thus, there are always constraints for those who have to work to maintain their economic status and to survive. I remember my grandmother had three offices in her prime years and she spent many late nights in them. When I lived with her, I would call her and ask her to come home, but she would say I have to finish this. And then she would come home very late. Even though she was upper middle class, she did not have the freedom to choose how she spent the majority of her nights.

The free class benefits from the unfreedom of many and taking the surplus capital produced by laborers like my grandmother. Surplus capital is the difference between a capitalist’s profits and the meager wages, we the laboring class receive. For example, if a factory worker makes 50 shoes in an 8hr workday and earns $1 per pair of shoes but the factory owner sells the shoes for $10 each then the owner is taking $9 of surplus capital from the worker’s production.

As the chart above shows that surplus capital in the US that only seems to be growing, meaning the laboring classes increasing production is swelling the pockets of the free class.

3. Capitalism sustains polarization between the free class and the wage slaves 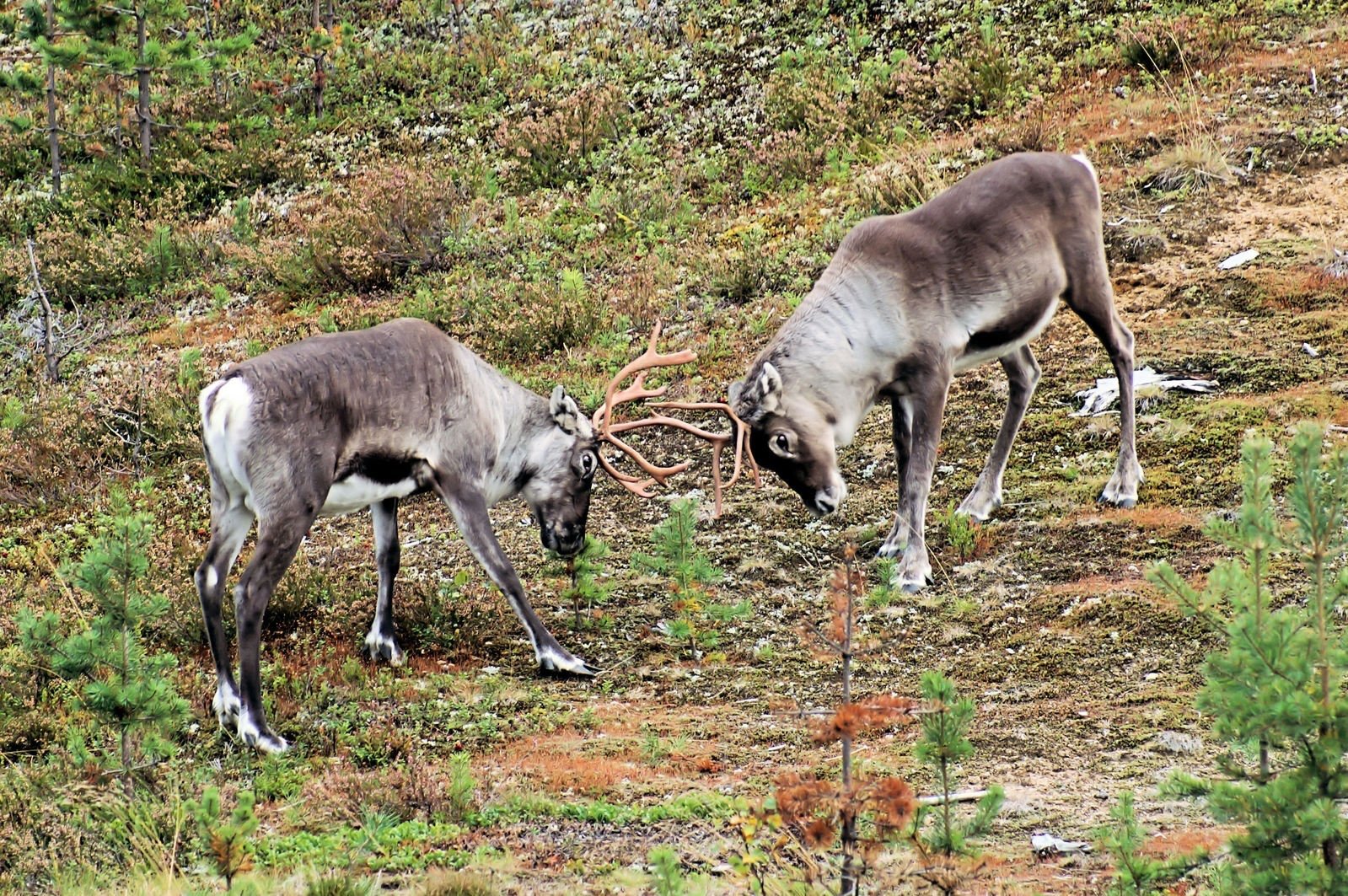 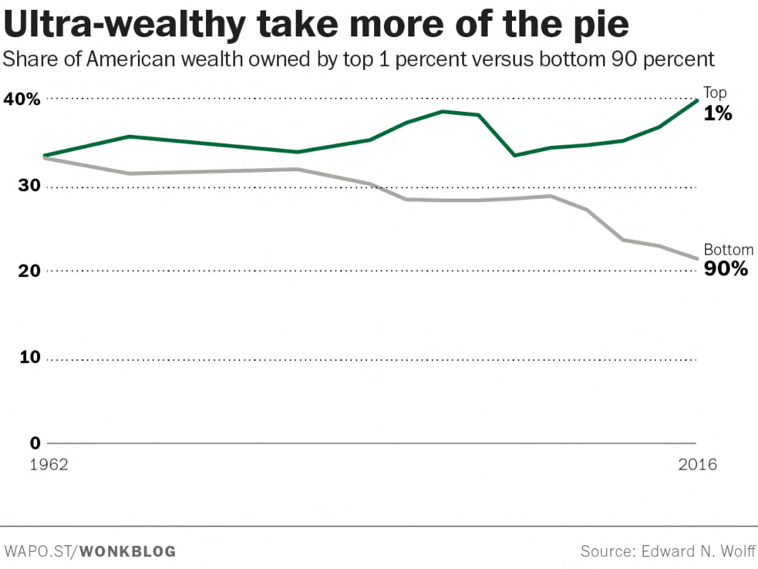 At some point this becomes unsustainable and we have a crash, bubble, recession, or even a great depression. They have all kinds of names for what I understand to be the same thing: market economies resetting themselves when the wealth of the free class grows past the real production of the wage laborers. Basically, when the free class produces wealth from nothing through buying their own stocks, market inflation, and other ways, they are borrowing from the wealth of the excess production produced by workers. When the ratio of wealth and real commodities gets to an unsustainable point like during the 2007 housing market crash the bubble bursts and more wealth is funneled from the wage laborers to the free class.

Just look at the charts below that show how the upper-income has raised from 40 times to 75 times the bottom after the recession. However, the free class doesn’t depend on wages. In the chart to the right we can see how only the wealth of the top 10% (people with million+ in liquid assets) has raised exponentially compared to the wealth of the bottom-income 50% . Moreover, the wealth distribution has barely budged. 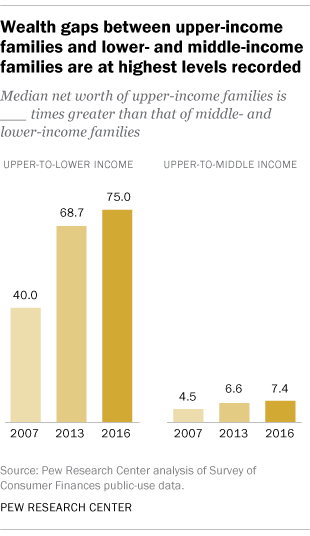 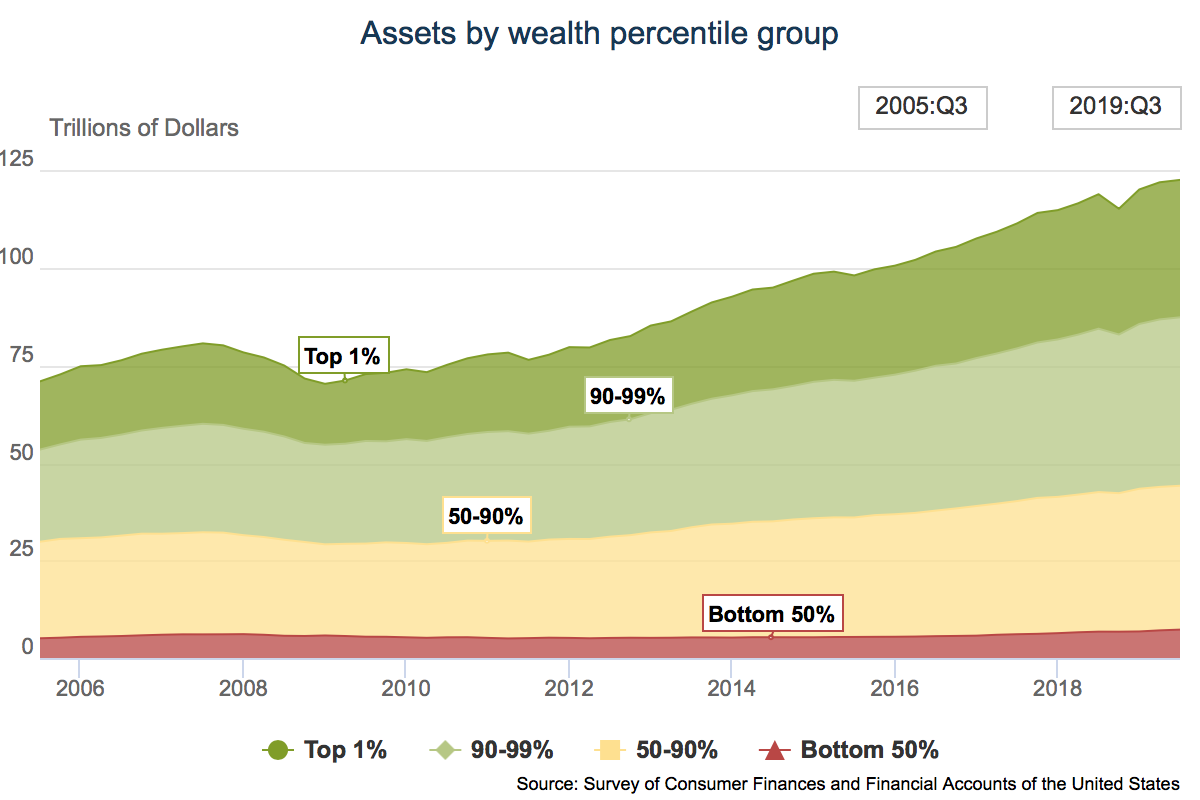 When you put something on the market then a number of people will not have access to it because it is not freely available. Today many people worldwide and in the US are struggling to obtain human needs like water, housing, clothing, and food. This is not because of lack of production. There is enough food, water, and textiles to feed, house, and clothe the world. Some may be thinking 'what’s wrong with that'. Well in other countries that is not always the case. Other countries have WORKING social safety nets and access to land, housing, and health care as a part of citizenship. Listen to this story about an American woman working abroad for a Baron in Parliament.

Spoiler: A constituent needs housing and she houses them on the govt’s dime

The problem is distribution on a market capitalist system. 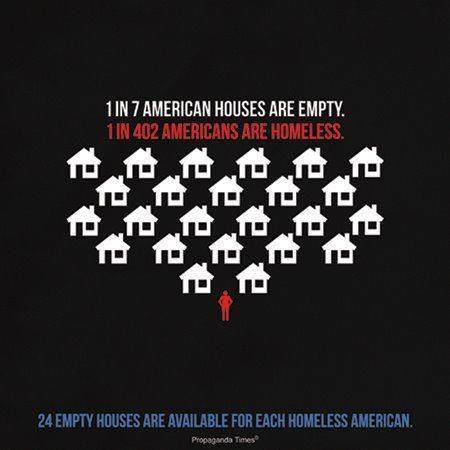 The world already produces more than 1 ½ times enough food to feed everyone on the planet. (We throw away the excess food and put it in landfills in Black and Brown communities) 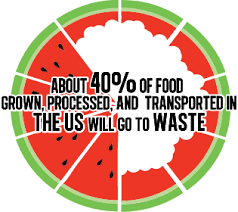 Every person requires approximately 135 liters (over 35 gallons) a day but the Overdeveloped world uses 375-700 liters per person. 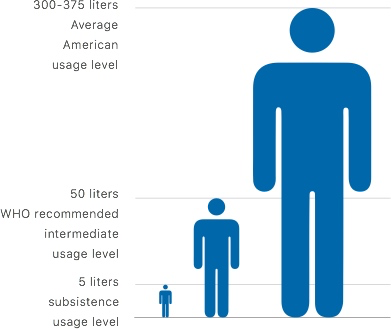 We don’t need better technology or higher production to distribute the basic of needs of people in the US and beyond. We let people go without human needs because they cannot access it through the market.

The market distributes human needs based on capital which means many people go without the necessary things for a good life (food, water, shelter, clothing, and healthcare) and struggle their whole lives trying to get them. When people do not get these things they die prematurely and they live lives of desperation and struggle. I and other academics call this Social and Material Death. If you are struggling for these things there is little energy left to invest in yourself or society and this struggle will cut years off your life. 15 years to be exact. The life expectancy between the poorest and the richest class is about 15 years. Moreover, the lifespans of the poorest and lower middle have lowered not risen since the 1980s compared to all other classes. Thus, their quality of living is not meaningfully rising. 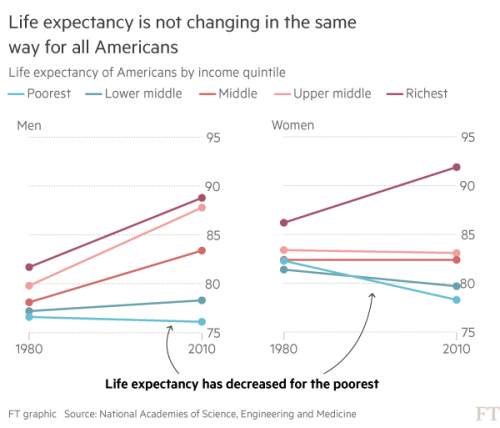 5. The Capitalist system manipulates the human social relationships to other humans, beings, and the earth.

Millionaires and Billionaires should be seen as scrooges sitting on top of a pot of gold they cannot spend in their lifetime. A homeless person should be a site for sore eyes with the wealth we produce in this country, however inequality persists amongst so much abundance. WHY!? My answer: the capitalist market system manipulates the human desire for cooperation and changes it to competition. Thus, hoarding resources while your neighbor starves is normal. 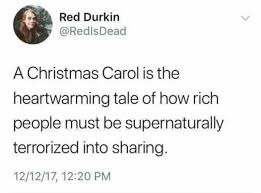 The capitalism system depends on a liberalist view of nature. A liberalist view of nature creates a false separation  between humans and the natural world humans live in and depend on. With this view we set up a property relationships between humans and nature. The market system does not include the ecological and climatic externalities of the system and those are socially distributed based and not embedded in the price of the products we consume. In other words, wealth and the production of things for the market correlates with how much carbon you put in the environment. Thus, destroying the environment that we need to live in is a product of a capitalist market system. See table below. The richer you are the more carbon you emit. 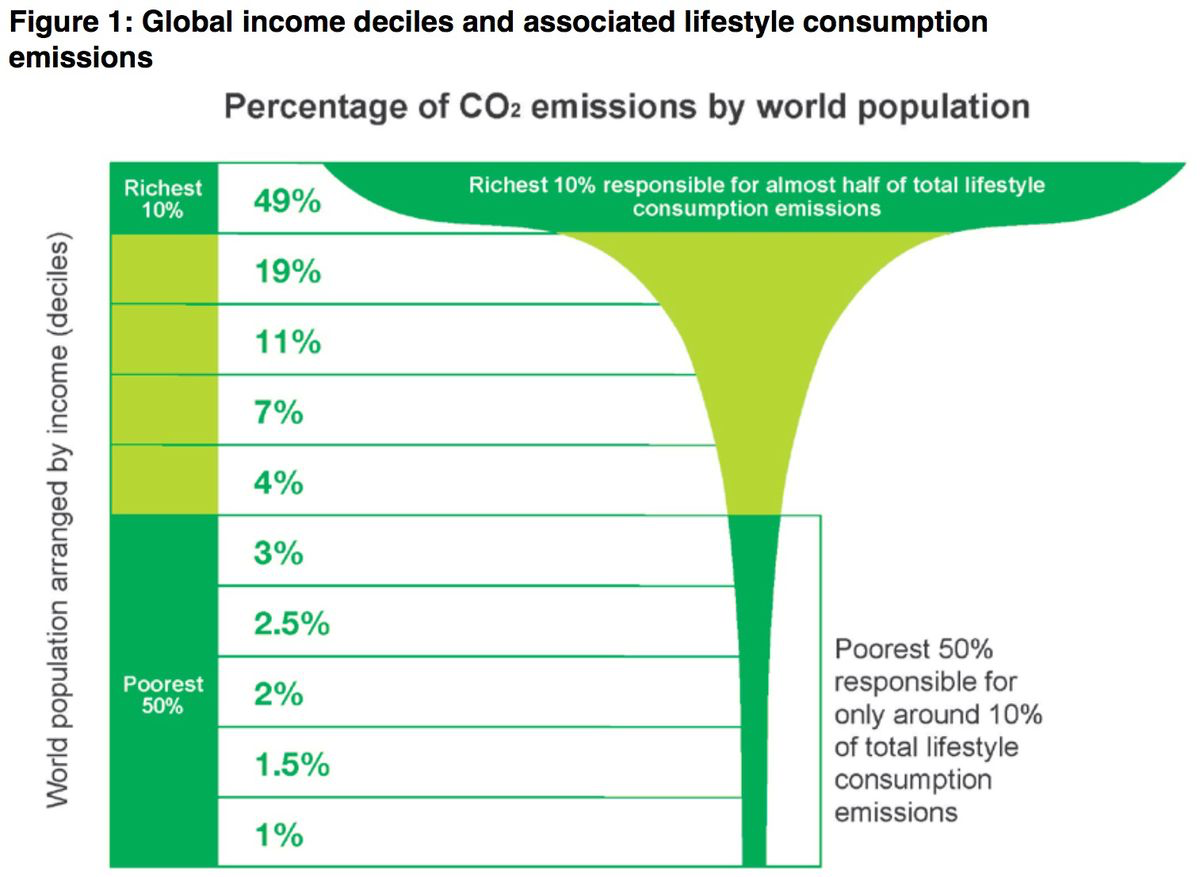 Capitalist market economies have failed to produce a better life for the masses. In fact, it is making our lives worse. It has divided us into the few rich and the many poor, produced social death, misery, and shortened the lives of the laboring class. We don’t have freedom over our daily lives, instead, we are overworked, and underpaid. At least in the times of monarchies the leader’s livelihood depended on the health and wellbeing of the bottom classes. Now the misery and death of many sustains the surplus wealth of the free classes. And on top of all that the planet we live on will not be livable for humans if we continue on this path. I hope this makes you angry, self-righteous, and riotous. And of course, Abolitionist.